Despite a rumor that this invention is a myth of someone's imagination, I have recently had the pleasure of reviewing one of my earlier simulations from almost a year ago which claims that I have come as close as I can to speculating what this thingy of Tesla is...

But upon further review, it dawned on me that only two labels were missing from this simulation which tag the 'M' and 'H' coils...

Tagging them makes it possible to fill in some of the remaining relationships which are not meant to be taken too literally...

Building up to any output from a cold start...

Although a strong case could be made for speculating that analogs of transmission lines might have something to do with this mystery, ...

Topping off an EV's battery pack...

... or the mysterious EV conversion of a Pierce-Arrow four thousand pound luxury car of 1931 by Tesla since it can't be a mere happy accident that Tesla chose a car with a heavy chassis which may contain lots of ferromagnetizable mass?

After labeling the 'M' and 'H' coils, it stilled bugged me that aluminum was not included in my simulation since I assumed it wasn't possible to emulate the paramagnetic properties of aluminum without recourse to more sophisticated software.

But, then, another thought dawned on me: common modern day capacitors very frequently base their dielectrics on aluminum oxide known as ceramic capacitors. So, I took some interpretive liberty in adding four capacitive connections between the four transformer coils which is intended to represent positioning the 'H' coils in the gap between the opposing feet of the two horseshoe laminate cores beneath the two 'M' coils. Thus, the 'M' and 'H' coils are, now, both inductively and dielectrically linked with each other.

If this could be introduced into the story of Tesla's EV conversion of a Pierce-Arrow in 1931 -- without the assistance of a battery pack or motor controller, then maybe the accelerator pedal was capable of decoupling and recoupling the magnetic link between the car's chassis and the 'H' coils' core material to turn OFF and ON, respectively, the car's acceleration?

Without recourse to Eric's, or Bewley's, analog computers, this speculation of mine uses inductive, as well as capacitive, parametric excitation to build up its energy. It also uses surges generated from the mechanical switches to add to its energy reserve. And a dead battery, if not totally dead, does not have enough juice to be of normal benefit to us, but is enough to start up a parametric oscillator such as this.
Posted by Vinyasi at 6:36 AM No comments:

Posted by Vinyasi at 1:17 AM No comments:

Posted by Vinyasi at 1:16 AM No comments:

Which becomes obvious in viewing the three stages of development of the EV Gray motor....


The FCC raid was the second of the two raids which the EV Gray motor was made to suffer through.

The Hutchinson Effect is a radio interference in an electrostatic field. The EV Gray motor must have been utilizing this effect to be able to have a COP of nearly 300! Tesla's Special Tri-Metal Generator must also have been using the Hutchinson Effect by blowing compressed air through the Nazi version of Tesla's device. An AC mechanical watt-hour meter and a DC homopolar/unipolar disk could both exhibit this effect, and each in their own way.

A DC homopolar/unipolar disk could separate the magnetic field from its electric field causing one to drag behind the other by the proper arrangement and use of aluminum, copper and iron as noted in my prior video...

The Lenz Effect is a DC time lag between a leading electric field and a dragging magnetic field.

An AC mechanical watt-hour meter separates the voltage and amperage components of an AC sine wave coming from the power grid in order to operate as an induction motor to spin its aluminum disk. The immersion into an electrostatic field of these two electromagnetic (radio) waves constitutes the Hutchinson Effect.

What helped me come to these conclusions is this video...

magnetic field on aluminum, by lumen0

...which seems to imply an hypothesis that a second set of electric/magnetic fields are cloned perpendicular from the first set whenever eddy currents are generated in aluminum.

Mark McKay's analysis of the EV Gray motor.
View links to ODT files at bottom of the above blog which all lead to: http://gratisenergi.se/

Or else, download as a 43 Mb zip file from...
http://tinyurl.com/evgray
~or~
https://drive.google.com/file/d/0B8FRm7LqRgoabkJOLTdFZ3JvQ00/view?usp=sharing

Or, from here...
http://vinyasi.info/Tesla_Tri-Metal_Generator/Mark-McKay-analysis-of-EV-Gray-motor.zip
Posted by Vinyasi at 1:16 PM No comments:

Here is my latest imagination of a solid state version of Tesla's Special TriMetal Generator.

I incorrectly quoted someone in this video. It's the north pole, not the south pole, which this fellow says has a slight tendency of sticking to an aluminum chunk of metal.

My only addition to this line of imagination is to add a capacitor to make this into a tank circuit to create a reactively responsive relationship between the circuit and the external load. This is assuming that a solid-state version of Nikola Tesla's Special Generator can only be an AC device. William Lyne's story of the mechanical reciprocating piston variety lends itself to an AC version as well. So, there may not be any DC version, possible, which takes this generator out of the realm of direct correlation to any conventional homopolar or unipolar generator of Michael Faraday's legacy. 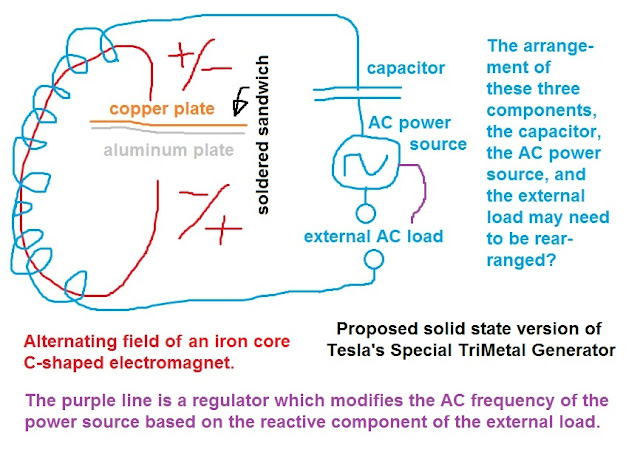 Sweets hand-dipped in beeswax/oil blend.
Posted by Vinyasi at 8:41 PM No comments:

The Definition of a Transformer

But wait...
There's no such thing as a DC transformer, right? Wrong...

Consider the Perpetual Motion Holder made famous by Edward Leedskalnin consisting of a horseshoe piece of magnetizable iron with at least one coil of wire wrapped around one of its legs. The bottom of each leg is planned smooth and sanded to fit flush against the side of a magnetizable iron plate long enough to span the two legs and create a magnetically closed circuit. A weight is attached to this plate to make it nice and heavy. One end of the coil is connected to a light bulb. The other end of the coil is detached from anything. Another piece of wire comes off the other side of the light bulb and is also not attached to anything.


Go To Energetic Forum for an Explanation of this Schematic 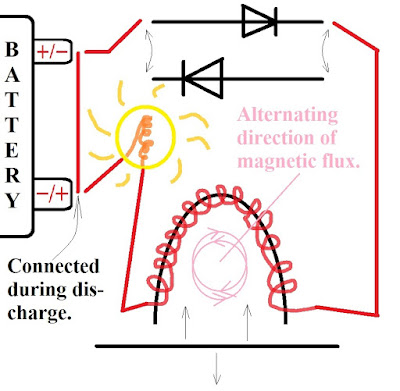 By momentarily connecting the two loose ends of wire to a DC power source, namely: a battery - just for an instant /by brushing the contacts/ while the iron bar spans the two legs of the horseshoe shaped iron core, we now have stored DC energy into this transformer indicated by the bulb momentarily lighting up. We can tug the iron plate all we want to, but unless we slip it sideways, it won't want to come off too readily. And we can leave this device, as is, for any length of time with no diminishment of stored force. But once we slip the iron plate off to one side and disconnect the magnetic loop, we no longer have any magnetic energy stored inside the horseshoe core. This loss of energy was indicated by the light bulb flashing once again when the magnetic loop is broken upon removal of the iron plate from its fixed position spanning across the two legs of the horseshoe iron core.

Now, I contend that this constitutes one half cycle of an AC transformer in which energy is stored and then it is released when the next half cycle is begun in reverse polarity.

But there is another way to define this...
The storage of magnetic energy constitutes a time delay in which each half cycle of storage constitutes the delay between the moment the energy goes into storage within the confines of the iron horseshoe and plate arrangement, and the moment this same energy comes out.

So, the true definition of a transformer is a device which accentuates the factor of delay. This also holds true for electrostatic delay in which the breadth of dielectric spanning two plates of a capacitor governs the rate at which a capacitor may charge or discharge its stored energy.

This was made clear to me reading Mark McKay's analysis of the thickness of the aluminum chassis (page 13) surrounding the EV Gray motor, and Tesla's Induction device... 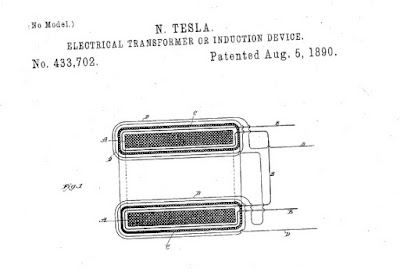 The inside of the chassis was insulated by a thin coating of teflon to prevent arcing. But this insulation also provided for the chassis to function as one plate of a capacitor. And this outer plate was electrically coupled to a lead acid battery pack to harvest the buildup of electrostatic energy (as a useful benefit) to recharge the batteries and hopefully performed in such a way as to avoid blowing up the batteries - which unfortunately happened more often than not!

But the point is that...
It is possible to redefine transformers to include, rather than exclude, a DC situation by restating its definition, thusly...

This may be what Jim Murray and Paul Babcock have managed to do in some of their devices.

Could Tesla and Marvin Cole, in the EV Gray motor, have figured out a simple way to do this? Maybe...

At least the conceptual model could be simple whether or not its execution is simple as well...

So, getting back to 'design characteristics', let's redesign an imaginary mockup of a Tesla Special Generator... 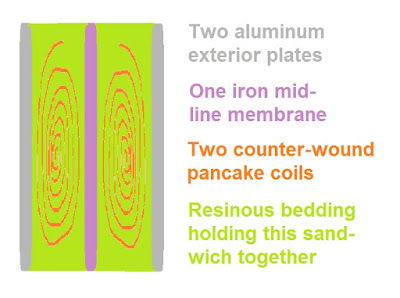 This device is not a generator in the normal sense, but an extender, in which the load is now contributing to its own power supply /via modification of the load's feedback/ creating magnetic and electrostatic delays. But if William Lyne's quotation of Tesla, and our assessments are [here on this blogsite] correct, this would truly constitute a self-running (not self-starting) generator that could last "5,000 years" with no moving parts.

Links to ODT files at Gratisenergi.se

There once was a little boy who talked to the moon. He said, "Moon - where's your daddy?" The moon replied, "I have n...